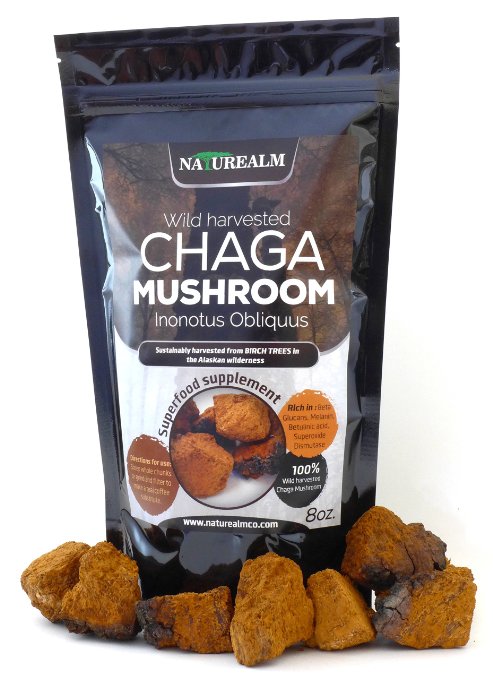 Chaga (Inonotus Obliquus) is a fungus which grows on several types of trees, mostly Birch species, in Northern latitudes of Europe, Asia and North America.
In the regions where it is found, Chaga has been used for hundreds of years as a natural medicine.
Only in recent years has it been studied extensively for its unique medicinal properties. Research has found that Chaga has one of highest antioxidant levels of any food.
Chaga extracts nutrients from its host tree and converts them into a form which can be easily digested by humans.
Beta Glucans help maintain healthy cholesterol levels and a strong immune system. Melanin promotes healthy skin, hair and eyes. Betulinic acid is an anti-inflammatory, anti viral, anti bacterial. Superoxide Dismutase promotes the breakdown of free radicals.

Our Chaga is sustainably harvested in remote pristine forests of North Central Alaska by a small team of professional foragers who often brave below zero temperatures.

Lab tests have shown higher concentrations of antioxidants than any other chaga in North America and being so far removed from industry and air pollutants, the purity is unsurpassed.

Whole chunks can be brewed to make a mild, woody, slightly sweet tea, grind/crush and mix with coffee or create your own alcohol tincture.
To make a simple delicious medicinal tea:

1. Bring 4 cups of water to a boil
2. Drop in 1-2 chaga chunks and turn to low
3. Simmer for 15 minutes to an 1 hour or more depending on desired extraction level.
4. Chunks can be refrigerated and reused 2-3 more times.
Some chunks may have white residue on the black outer crust. This is the betulinic acid, one of Chagas many medicinal compounds. Not mold.